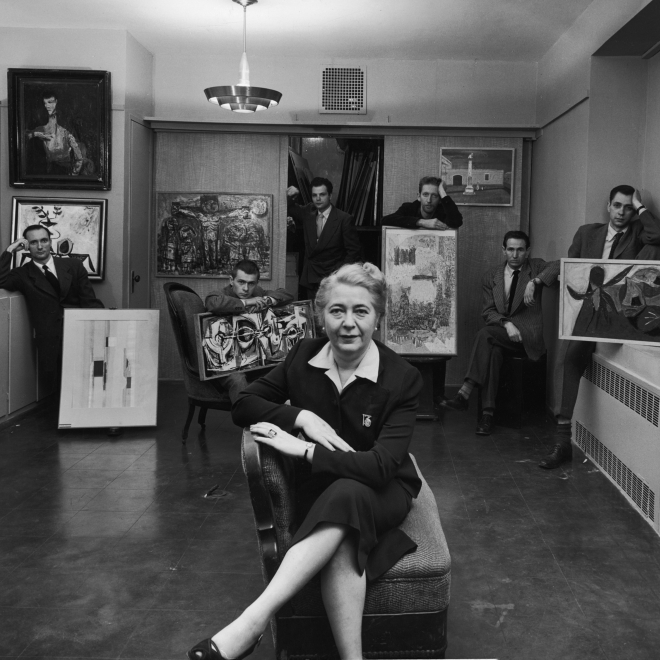 "Edith Halpert and the Rise of American Art": A Lecture with Rebecca Shaykin

Join us on Wednesday, January 22 at 6 pm as we welcome Rebecca Shaykin, Associate Curator at the Jewish Museum, for a discussion surrounding the exhibition she organized and curated, "Edith Halpert and the Rise of American Art," on view at The Jewish Museum through February 9, 2020.

The exhibition is the first to look at Edith Halpert, a pioneering female gallerist who championed living American artists in her Downtown Gallery. The exhibition reunites artworks that passed through Halpert's gallery as well as those that were in her personal collection. Although Chaim Gross was not represented by Halpert, they both collected many of the same artists, including Stuart Davis, Yasuo Kuniyoshi, Jacob Lawrence, and O. Louis Guglielmi, among others.

Space is limited. Tickets are $15 per person and can be purchased through Eventbrite.

Photo: Edith Halpert at the Downtown Gallery in a photograph for Life magazine in 1952. She is joined by some of the new American artists she was promoting that year: Charles Oscar, Robert Knipschild, Jonah Kinigstein, Wallace Reiss, Carroll Cloar, and Herbert Katzman. Photograph © Estate of Louis Faurer 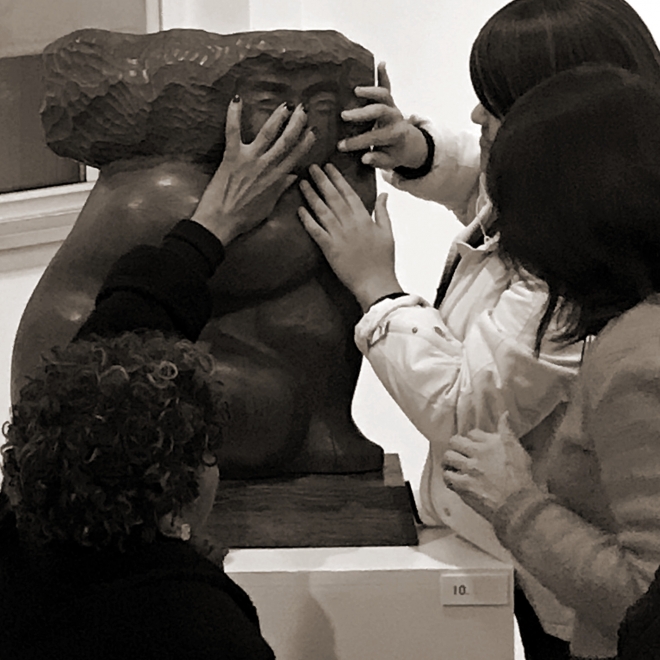 The Renee & Chaim Gross Foundation is excited to announce the continuation of “Tactile Transmissions,” a 90-minute Access Program geared toward visitors who are blind or partially sighted. “Tactile Transmissions” encourages participants to touch and create while surrounded by Gross’s sculptures and drawings. The program focuses on the historic workspace, materials, and current tactile exhibition, Teaching Through Touch: Works by Chaim Gross, utilizing verbal description, touch, and making. Visitors will work with our talented educators Nitza Danieli, Pamela Lawton, Annie Leist, and Deborah Lutz.

Each session will have a different theme:

Due to limited space, please RSVP to Brittany Cassandra by phone 212-529-4906 or email bcassandra@rcgrossfoundation.org. If you would like to bring a guest, please let us know.

The Foundation is located at 526 LaGuardia Place, between Bleecker Street and West Third Street. After passing through a wrought iron gate, please enter through the door at your left. There is a buzzer to the left of the door if needed. The first, second, and third floors are accessible by elevator.

View more about the exhibition Teaching Through Touch: Works by Chaim Gross 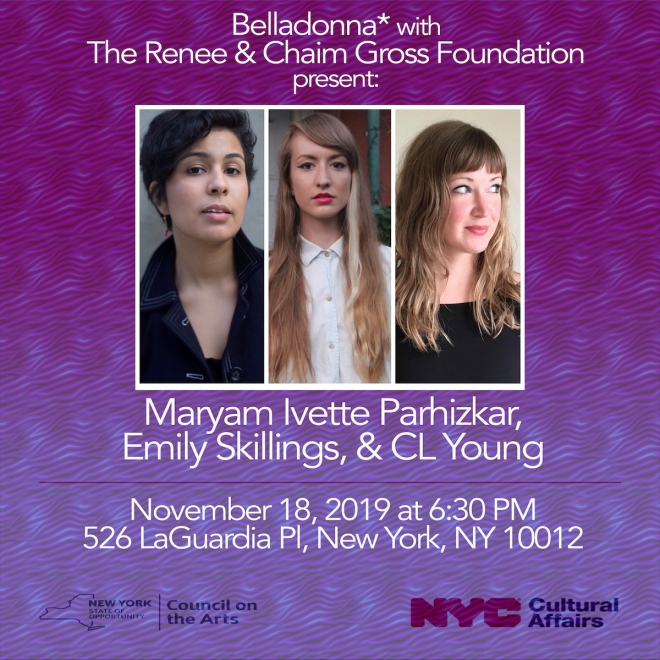 A Night of Poetry with Belladonna* Collaborative

Join us for an evening of poetry on November 18, from 6:30 - 9 pm, featuring poets Maryam Parhizkar, Emily Skillings, and CL Young. Tickets are $10 and can be purchased through Eventbrite here. Space is limited.

----------------------------------------------------------------
Maryam Ivette Parhizkar is a writer, scholar and author of two chapbooks: Pull: a ballad (The Operating System, 2014) and As For the Future (Portable Press at Yo-Yo Labs, 2016). Her recent writing can be found in The Felt, Omniverse, Social Text Online, Amerarcana/Shuffle Boil, Bone Bouquet, The Academy of American Poets' Poem-A-Day, among other places. Born and raised in southwest Houston by Salvadoran and Iranian immigrant parents, she currently lives in northern New Jersey, and is working on a series of poems on migration and the social and ecological landscape of the Hackensack Meadowlands. She is a 2019 CantoMundo Fellow.

Emily Skillings is the author of the poetry collection Fort Not (The Song Cave, 2017), which Publishers Weekly called a "fabulously eccentric, hypnotic, and hypervigilant debut," as well as two chapbooks, Backchannel (Poor Claudia) and Linnaeus: The 26 Sexual Practices of Plants (No, Dear/ Small Anchor Press). Recent poems can be found/are forthcoming in Poetry, Harper's, Boston Review, Brooklyn Rail, BOMB, Hyperallergic, LitHub, and jubilat. Skillings is a member of the Belladonna* Collaborative, a feminist poetry collective, small press, and event series. She received her MFA from Columbia University, where she was a Creative Writing Teaching Fellow in 2017. She splits her time between Brooklyn and Hudson, NY.

CL Young writes poems and essays. She is the author of a chapbook called What Is Revealed When I Reveal It to You (dancing girl press, 2018), and co-author with Emily Skillings of Rose of No Man's Land, a chaplet from Belladonna*. Her poems have appeared in Lana Turner, the PEN Poetry Series, Pinwheel, Sixth Finch, The Volta, and elsewhere, and essays can be found at Entropy and The Scofield. She holds an MFA from Colorado State University and currently lives in Boise, Idaho, where she runs a reading & workshop series called Sema. 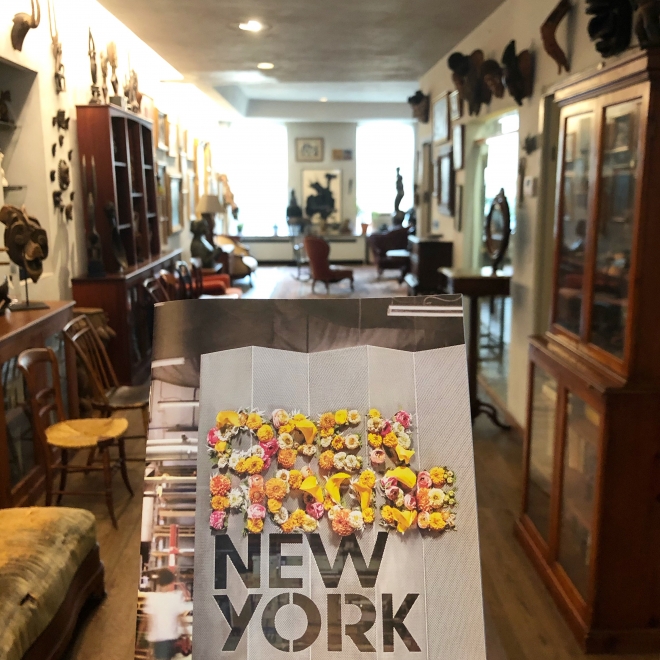 The Foundation is opening its doors from 10am - 6pm on Saturday, October 19 and Sunday, October 20 for Open House New York Weekend. Stop by to visit the home, studio, and art collections of Renee and Chaim Gross. All floors of the building are wheelchair accessible except for the studio space, which is visible from the gallery. 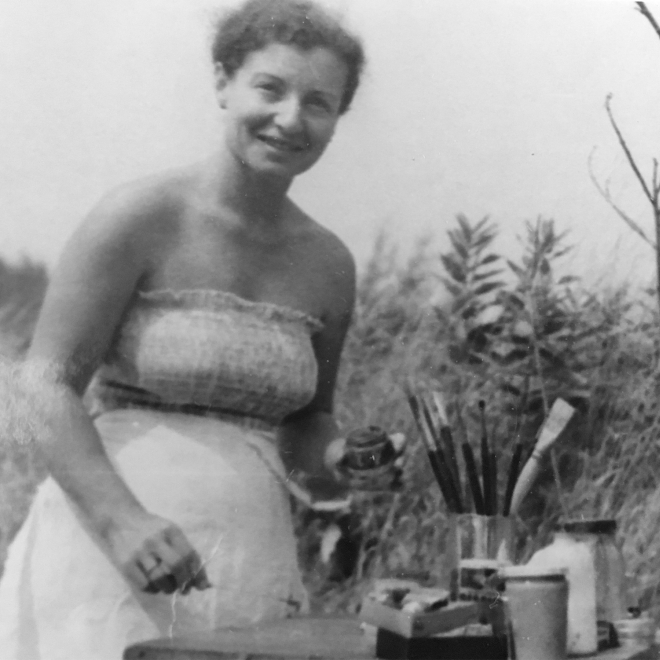 Film screening and discussion: "Marcia Marcus: Art in the Family"

Please join us for a screening of “Marcia Marcus: Art in the Family,” a documentary film in progress about painter Marcia Marcus (b. 1928), whose two-person exhibition Double Portrait with Mimi Gross is on view at the Shirley Fiterman Center at BMCC through July 27.

The film features paintings by Marcus, photographs from her extensive archive, interviews with artists and scholars, and an oral history with Marcus from 1975, which was conducted by Paul Cummings for the Smithsonian Institution’s Archives of American Art.

Following the film, we will have a discussion with Kate Prendergast and scholar Melissa Rachleff Burtt.

Tickets are $15 and can be purchased through Eventbrite here. 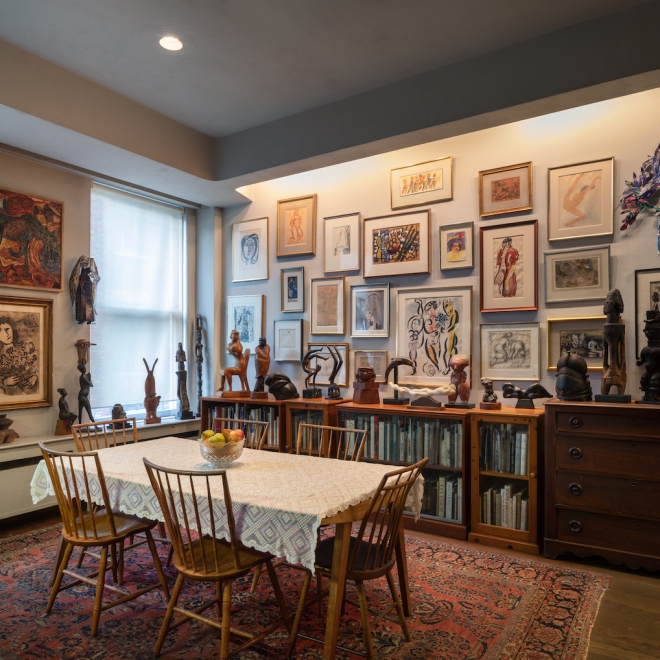 Conversations with Conservators: A Benefit to Support Conservation at the Renee & Chaim Gross Foundation

All proceeds from ticket sales and donations from this event will go directly towards the conservation of one or more works in the Foundation's collection.

Tickets: $50, available here or at the door; please note that space is limited

Lauren Fly is the founder of the Fly Arts Initiative, a fine art conservation and collections management practice based in New York, NY. With more than 15 years of international experience in paintings conservation and collections care, Lauren works with museums, private collectors, galleries, and other stewards of cultural heritage to preserve and protect their objects. She is passionate about promoting and demystifying conservation to the wider public, and loves talking about little things that can make a big difference.

Donna Page provides conservation and restoration services to collectors, galleries and museums throughout the US, specializing in African wood and terracotta artifacts. She holds an MFA from the University of Wisconsin-Madison; taught at Illinois Wesleyan, Drew University, Queensborough College-CUNY; and worked with the L. Kahan Gallery of African Art (1980-98). She is co-author and co-editor of several books on African art, including Surfaces: Color, Substances and Ritual Applications in African Art (Indiana University Press, 2009).

Christopher Skura joined Alvarez in 2007 following a 20 year career as a museum professional and then as a studio assistant to master paintings conservator, Dr. Charles Von Nostitz in New York City. From 1997 - 2010 he owned and operated a gilded surface and period frame restoration studio. Christopher has also been a studio assistant to many artists, including John Chamberlain and Hunt Slonem, and has completed James Bernstein's Mastering Inpainting Workshop at the Ringling Museum of Art. Christopher is a practicing artist and holds degrees in studio art from The Ringling College of Art and Design and liberal arts from New York University.